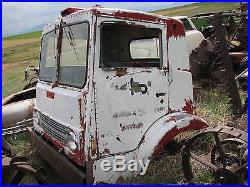 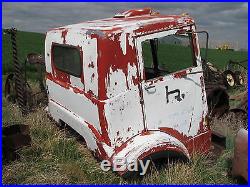 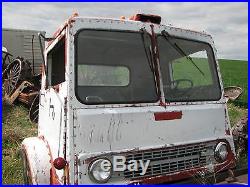 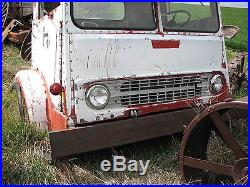 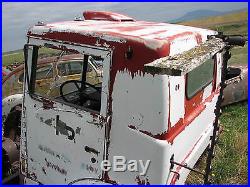 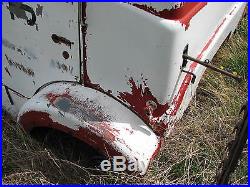 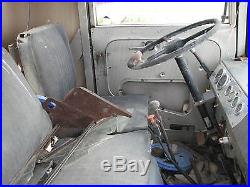 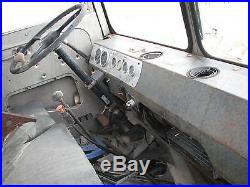 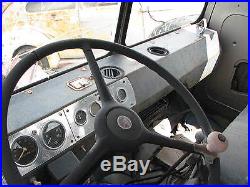 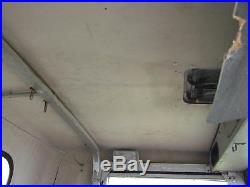 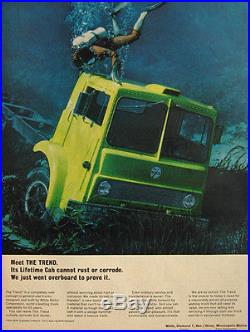 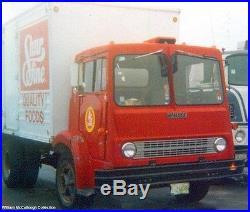 This listing is for a cab assembly from a 1966 or 1967 White Trend light duty truck. It includes the front bumper and is setting on the front part of the truck frame that was cut off directly behind the cab. This cab was made from a thick but relatively light and strong plastic material called “Royalex” that was made by Uniroyal or the United States Rubber Company in Ohio. This very tough material was also used by Glen Pray in the mid 1960′s in Broken Arrow Oklahoma. Glen built several hundred 8/10 scale replicas of the 1937 Cord convertible coupe automobile. These Cord replicas used a Corvair drivetrain to power the front wheels through a Citroen front drive suspension. I believe this truck was introduced at about the same time that White bought the Minneapolis Moline and Oliver farm equipment companies. I have reason to believe that some of the MM, Oliver and White farm equipment dealers around that time used these trucks to deliver farm equipment. The last photo of this listing shows a truck like the one this cab was used on. The next to the last photo of this listing is of a vintage magazine ad that shows the corrosion resistant capability of the Royalex material used in this cab. I saved this rare and very unusual truck cab assembly several years ago when a friend was closing his truck salvage yard here in Bozeman Montana. I have limited storage where I live here in Bozeman Montana so I hauled it 225 miles north to the home ranch east of Great Falls Montana where it is now located. I may be able to get more photos in a week or two when I go back up there if need be. The following interesting information is from Hank’s Truck Forum. This truck is a Diamond T design. It’s the company last all-new model. It was introduced in early 1966 as the Diamond T HF3000. White started using it (White 1200) at the autumn of 1966 and Reo used it very briefly in the spring of 1967. Even if the truck was known as “Trend“, it didn’t set any trend because nobody copied it. The cab was made of Royalex plastic. This was Diamond T’s only model to use a Chevrolet engine (350). A Cummins V6-140 was optional. Another Hank’s Truck Forum post reads. On page 76 of the Jan/Feb Wheels of Time under the White category is what is described as a 1967 White Trend. I remember hauling the shells for these cabs which were fiberglass (not true) from a fabricator in Salem Ohio to the Reo plant in Lansing Michigan and since White applied the White/Autocar/Reo/Diamond T brands to related models I think this may be the same vehicle type. The time frame that I remember goes with the model year of the unit in the picture. The following interesting information regarding Royalex is from Wikipedia. Royalex is basically a board comprising a’sandwich’ of standard rigid ABS sheets in the core of which is an ABS layer designed to foam/expand during the heating stage prior to vacuum forming. Thus Royalex can be designed to form virtually any finished thickness to suit the end application. One just adds extra sheets. Since ABS has a poor resistance to UV a thin outer layer of UV resistant vinyl is generally included. This can be self colored or painted. ABS is a’marriage’ of rubber and thermoplastic, Acrylonitrile, butadiene, styrene. It was developed at US Rubber Company’s Chicago plant by Bob Pooley and was simply called Royalite. US Rubber of course was renamed Uniroyal, a blanket name to encapsulate their worldwide enterprises, until then with separate names. Later Bob Pooley and associates continued work on Royalite to introduce a foaming/expandable element. This was accomplished at their plant in Warsaw, Indiana. The resulting product was named Royalex to recognise the expanding core. Although extremely versatile as well as being virtually indestructible, the material was expensive compared to available alternatives. Even so many industries were attracted to evaluate Royalex. Items produced included Caravans (vacuum formed in two halves) the top was a mirror image of the base so that only one forming tool was required. White Motors introduced a limited run of tractor cabs. A company was formed to produce a replica of the famous’Coffin nosed’ Cord. Gene Bordinat, Chief Designer at Ford designed a concept car in Royalex in 1965. This resulted in the’Ford XP Bordinat Cobra. The writer brought both of these cars to London, England to show at the International Plastics Exhibition and for exposure to the then extensive automotive producers. Royalex was extremely tough but if hit hard enough could be dented. If this happened such dents could be’recovered’ by applying a hand held hot air gun which re-expanded the core to blow out the dent. Sadly the cost, as well as the need to accost a different build technique when using Royalex, mitigated against its acceptance in large scale production and eventually simple canoe bodies became the main product. An additional reason was that following the breakup of the Uniroyal empire, product specialists were’lost’ and there was no longer a team to drive the concept. The item “1966 White Trend Truck Diamond Reo Autocar Oliver Minneapolis Moline Tractor” is in sale since Thursday, May 14, 2015. This item is in the category “eBay Motors\Parts & Accessories\Vintage Car & Truck Parts\Exterior\Other”. The seller is “toysanyone” and is located in Bozeman, Montana. This item can’t be shipped, the buyer must pick up the item.
Filed under: white | Tagged as: autocar, diamond, minneapolis, moline, oliver, tractor, trend, truck, white

The comments are closed.